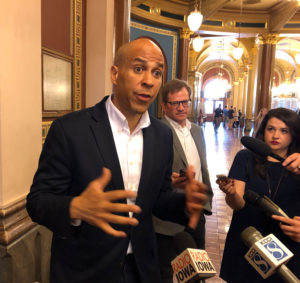 Last Friday, during a tour of southwest Iowa’s flooding, Vice President Mike Pence criticized the New Jersey senator and other Senate Democrats running for president, as Democrats in the senate have blocked a vote on a GOP disaster aid plan, arguing it should provide more money for hurricane recovery in Puerto Rico.

“I think all of us should get sophisticated enough for people on both sides of the aisle that when someone comes to town and starts pointing fingers and throwing stone, it says more about them than it does about their earnest desire to actually reach out and solve problems,” Booker told reporters in Des Moines today.

“I don’t have anything negative to say about the vice president at all,” Booker said today. “I actually invite him to work with us to find a solution that helps all Americans who are dealing with crisis because I know, as a survivor of Hurricane Sandy, that this is not a time to play politics. This is a time to get the resources to the people that need it.”

Booker said Iowa flood victims, as well as victims of the California wildfires, recent hurricanes in the Gulf and the two hurricanes that hit Puerto Rico in 2017 all deserve federal assistance.

“To see a crisis for folks who lost homes here in Iowa not pulling us together, but having politicians trying to exploit that for political gain is so offensive to me,” Booker said. “Right now, I’ve been across this state and have heard directly from the people who are struggling. We need to put our politics aside and pass the bill that gives hurting people the resources they need to recover.”

Booker has just wrapping up a two-day campaign swing through western and central Iowa. The U.S. Senate is in a two-week recess, so this debate over disaster funding won’t be resolved until after the senate reconvenes at the end of the month.