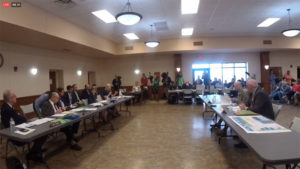 A field hearing on the Missouri River flooding was held in Glenwood.

A U.S. Senate hearing today in Glenwood focused on the U.S. Army Corps of Engineers management of the Missouri River following the massive flooding along the river.

The river management has been criticized by residents who say the Corps is more focused on recreation than protecting them. A Corps spokesman pushed back, saying they were focused on flood control — but Iowa Senator Chuck Grassley was not convinced. “They would have a hard time selling that to the residents of Iowa, Nebraska, Kansas and Missouri, and I fell the same way. And I am going to back up my constituents,” Grassley says. The Republican Senator says flood control “needs to be the Corps’ number one priority, period!”

“Right now I am mostly concerned about getting the emergency money for the Corps to fix up what has been damaged as a result of this flood, and then take on the next thing. But we’d also feel that better control of the existing dams would be a step in the right direction — and that we ought to do that first.”

Grassley believes the hearing may’ve made an impression on the Corps. “I think that that may be the only good news that has come out of this hearing — that they are willing to reconsider some of the things by which the decisions were made now that have led to this extraordinary flooding that we’re having lately,” according to Grassley.

Senator Joni Ernst called for the hearing by the Senate Environment and Public Works Committee. Ernst, a Republican from Red Oak, says they also need to look at the way flood relief funding is handled. “Because of the low property values in the Midwest, we are often the last ones to receive funding from the federal government,” Ernst says.

She says for example, a fancy restaurant on the east coast gets a higher priority, because it is a higher value property. Ernst says that leaves many people with real needs at the end of the funding cycle. “Regular communities across the Midwest — where I think the benefit would be much better than serving caviar or other fancy meals out on the east coast. So, we really need to be sure that we are funding properly,” Ernst says.

Ernst says continued flooding on the Missouri is unacceptable and needs to be fixed. One suggestion is to eliminate fish and wildlife as a Corps priority in managing the river. “While it is very important — I will not disagree with that — but is it more import than the life and safety of human beings? Their livelihood. No, it is not a higher priority,” according to Ernst.

Major Scott Spellmon of the Corps said during the hearing that flood control is their top priority “during periods of significant runoff”. He says nothing could have prevented this spring’s flooding because of the overwhelming amount of water that came down the river from the so-called “bomb cyclone” in mid-March.