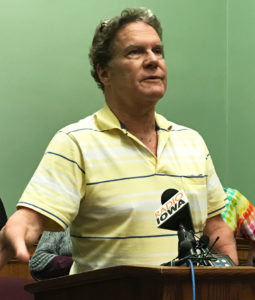 Two eastern Iowa Democrats say they’re looking for Republican allies in the legislature to give the residents in mobile home parks more rights.

A Utah-based company recently purchased five mobile home parks in Iowa, giving some residents 60-days notice of sizable rent increases. Don Lund has lived in Gulf View Trailer Court in North Liberty since 1997. The rent on his lot will go from $285 to $450 a month.

“I haven’t been able to work a 40 hour week — I was born without hands or feet — for about 20 years, so I’ve been on Social Security and Supplemental Security,” Lund said during a news conference at the state capitol. “…I’d like to grow old here. I’ve got it all set up. It looks good. I keep it up.”

Frank Comito lives in Midwest Country Estates mobile park in Waukee. He’s facing a 40 percent increase in the rent on his lot.

“That’s a bit steep,” Comito said. “…There’s a lot of people in our trailer park, especially my neighbors, who are one paycheck away from losing everything. It’s just sad.”

Candy Evans, another resident of the North Liberty park, said the manufactured homes are aren’t mobile.

“My home can’t be moved,” she said. “We put an addition on. It’s attached to it. It’s on footings, so if I leave, I leave without my home.” 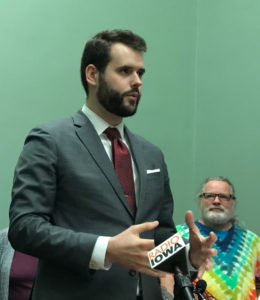 According to Senator Zach Wahls, Utah-based Havenpark Capital has purchased mobile home parks in Waukee, North Liberty, Iowa City, West Branch and Indianola. Wahls, a Democrat from Coralville, is hoping the 2019 Legislature can pass a bill that would require 180 days notice of rent increases and give Iowa’s attorney general more authority to investigate complaints about mobile home park abuses. Wahls said the mobile home park owners should be required to show “good cause” for any evictions.

“We have private property rights in this state and in this country, but it is unconscionable that people are trying to take this approach: acquire the park, jack up the rent, evict people,” Wahls said. “This is an incredibly traumatic experience that people are now staring down the barrel of…It’s not right, fundamentally. This is not right.”

Senator Kevin Kinney, a Democrat from Oxford, said the rent hikes are “shameful” and he’s hoping lawmakers can find some way to help residents. There are nearly 600 mobile home parks in Iowa. Nearly six percent of Americans live in a mobile home park.