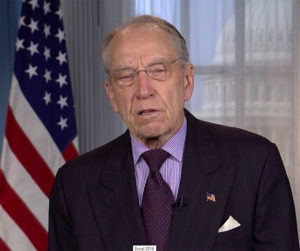 Grassley, a Republican, says tens of millions of taxpayer dollars were spent on the near-400-page report and he says it should be made public, with the exception of a few key areas. “You get accountability with transparency,” Grassley says. “Obviously, that doesn’t apply to grand jury and hurting people’s privacy or hurting national security.”

Grassley says he will not join with Democratic leaders who are calling for special counsel Robert Mueller to testify before Congress about the report he compiled over the past 22 months. “That’s up to Mueller. I’ve stayed out of what the special counsel’s doing,” Grassley says. “I wanted him to finish the job and his job is finished. If he wants to testify, he’s going to have to testify within the law.”

Grassley says parts of the report do need to be kept secret, like sections involving people who were questioned but who weren’t indicted. Those people could have their reputations “ruined,” Grassley says, if it came out they were investigated by Mueller. In addition, Grassley says sections of the report that could jeopardize our nation’s security shouldn’t be published — or discussed by Mueller if he choses to testify before Congress.

“I would expect that he would respect that law. He’s an honorable man,” Grassley says. “He’s testified many times before me, both as chairman and a member of the Judiciary Committee over several years that he was FBI director.” During a news conference in Washington D.C. this morning, U.S. Attorney General William Barr said the Mueller report found no “collusion” between the Russian government and the Trump campaign or any other Americans.