You are here: Home / News / Small percentage of Iowans have gotten a Real ID 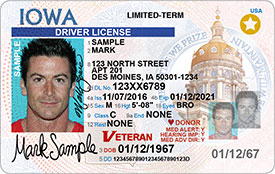 A Real ID has a yellow star in the upper corner.

A spokesperson for the Iowa Department of Transportation says around 30% of Iowa’s licensed drivers now have a “Real ID” license.

Andrea Henry says the licenses that have been approved for the program have a gold star in one corner. “It’s a way for the federal government to verify the identity of folks who carry a state-issued ID. So, instead of having to having to have a federallly-issued ID, they can use their Iowa driver’s license, but their identity is verified through the federal government,” Henry says.

She says it is good to sign up when you renew your license, as you will eventually need it to fly. “Right now it is not required to fly if you provide another form of identification — like a passport, or if you have a military ID — those are acceptable forms of identification,” Henry says. “But if you want to use your state issued ID or driver’s license card after October first of 2020, you are going to have to have it marked with that Real ID gold star in the upper left hand corner.”

Henry says the process of upgrading your driver’s license is pretty easy. “You have to show you are who you say your are by bringing in something like a birth certificate or your passport, or a permanent resident card. And then you have to document any name changes,” she explains. Henry says you need the documents that show you changed your name.”You need to have marriage certificate — or going the other way — a divorce decree or any court order for a name change if you legally changed your name,” Henry says.

Henry says most people make the change when renewing their driver’s license. She says when you renew your driver’s license, there is no extra cost. After October 1st of 2020 if you are not up for renewal, it will cost you 10 dollars for a replacement card. You can go to the Iowa Department of Transportation website to find a complete list of documents you will need to get a Real ID.