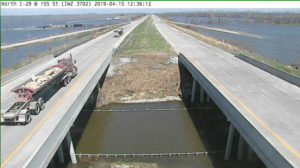 Dozen of miles of roads in southwest Iowa are closed because they’re still underwater or they’re badly damaged by recent flooding.

The Iowa Department of Transportation is trying to make it easier for motorists to navigate in that corner of the state. DOT spokeswoman Andrea Henry says the website 511ia.org and the 511 app are being constantly updated. “We have added the enhancement where we’ve actually painted the roadways that are closed in red,” Henry says, “so they’re easy to see at a glance what is closed and exactly the length of roadway that is closed.”

Henry says you might need to zoom into an area to see the red lines indicating a closed road. “You need to make sure when you’re on the 511 map that you click on ‘Incidents’ on the left hand side,” Henry says, “and that will show you those roadways that are closed due to incidents such as flooding, or if we do have a crash that would close a roadway temporarily.” 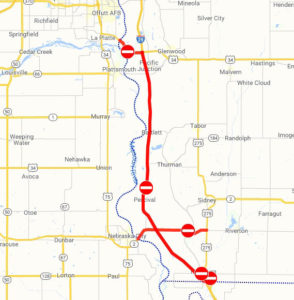 More than a dozen temporary cameras have also been secured in place in southwest Iowa — offering views that are visible using the 511 app and website — to help travelers keep tabs on the impacted roads. “We have them along Iowa 2, I-29 and US 34 as well, so that you can really see if there’s still water on the roadways in those areas,” Henry says. “You can see the debris removal activities as well as the construction activities that are going on along those roadways.”

Officials in Fremont County fear it could be as long as two years before all county roads are back in use. Henry says the DOT aims to have most of the major state-owned roads open by sometime well into fall.