You are here: Home / Sports / Drake gets physical to decide quarterback race 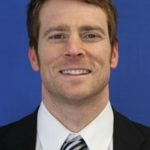 Drake football coach Todd Stepsis has taken a non traditional approach in his search for a new starting quarterback. Senior Alex Berg, junior Ben Nienhuis and sophomore Hunter Wendling are competing to replace Grant Kraemer under center and the coaches have allowed the quarterbacks to be tackled during spring drills.

“It is a little outside the box but they have not been protected by a red jersey and they can get hit just like everybody else”, said Stepsis. I just think the more real we can make it the real our evaluation will be in figuring out who our guy is going to be.”

Stepsis admits the offensive coaches were a little hesitant when discussing the idea of letting the quarterbacks get tackled.

“The players also are smart”, added Stepsis. “They know when to turn down a hit and when to ease off the gas a little bit. The quarterbacks have responded great and it has added a little bit of an element of toughness as well.”