You are here: Home / News / Gillibrand, Klobuchar say not some but all disaster victims need federal help 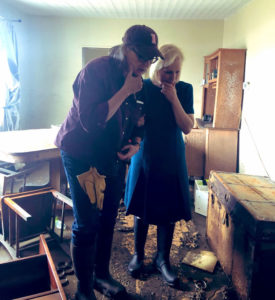 Two Democrats in the U.S. Senate — both presidential candidates — have a blunt message for Vice President Mike Pence.

Last Friday while he was in southwest Iowa, Pence criticized senators who are presidential candidates for blocking a Senate vote on federal disaster aid because it lacked funding for two 2017 hurricanes. New York Senator Kirsten Gillibrand said the president and vice president are pitting Puerto Ricans against Iowans.

“If we’ve learned anything from history, if we exclude one group, they’re going to exclude the next group and then then next group,” Gillibrand told Radio Iowa, “and then eventually it will be you.”

Minnesota Senator Amy Klobuchar said the Trump Administration is trying to “siphon money away” from Puerto Rican hurricane victims rather than approve the broader approach Democrats in the House have taken.

“Let’s stop this crap and get help to the people who need in Iowa, Nebraska and Missouri,” Klobuchar said during a news conference in the Iowa Capitol.

Both Klobuchar and Gillibrand have visited flood victims in western Iowa. Klobuchar went to Pacific Junction nearly three weeks ago and visited a woman who had to use binoculars to see her home in the distance — in the middle of the flooding.

“When it comes to infrastructure…there’s no Republican levee or a Democratic levee. There are only levees,” Klobuchar said. “And we should not be talking politics about this. We should be talking about how we come together.”

On Wednesday, Gillibrand went to a home in Pacific Junction with a couple returning to see the flood damage for the first time.

“Devastation. I can’t tell you how heartbreaking it was,” Gillibrand said Thursday. “…Congress needs to come together and pass that relief package. Now.”

On Wednesday, Democratic presidential candidate and New Jersey Senator Cory Booker said he’d like to invite Pence to join Democrats and Republicans in congress to find a solution that helps “all Americans” recovering from natural disasters rather than have disaster victims exploited for political gain.