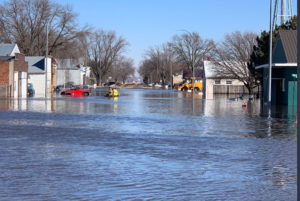 Governor Kim Reynolds says the flood damage estimate the State of Iowa submitted to the Federal Emergency Management Agency in March will be increased. The original, nearly $1.6 billion estimate of damage in western Iowa was developed a month ago.

“Then FEMA came in, with the National Guard and counted rooftops,” Reynolds says. “…I made it very clear in what I submitted that this was initial damage and there more than likely be additional damage and the dollars would increase moving forward.”

The Iowa Farm Bureau has estimated 127,000 acres of Iowa cropland has been affected by the flooding and ag-related damage alone is $2 billion. The governor says the repair costs for many of the busted levees along the Missouri River cannot be determined now because the water is still high in key areas.

“That’s one of the things I talked to FEMA about when I met with acting director Gaynor, to just say: ‘Please don’t shut this incident down because we are still vulnerable right now. We don’t know the extent of the damage,'” Reynolds says. “We need some time to get those numbers to them.”

On Friday, March 22, state officials pegged major and minor damage to flooded homes at more than $400 million. Damages to businesses and commercial property was estimated in the range of $300 million.

The final damage estimates are key for each county, as it determines whether federal disaster assistance will be made available to individuals and whether federal money will help rebuild facilities owned by the state, city and county governments. The seven western Iowa counties of Fremont, Harrison, Mills, Monona, Pottawattamie, Shelby, and Woodbury already have been declared federal disaster areas. For individual residents, it means they may apply for federal grants and low-interest loans to cover home repairs or other disaster-related expenses. In addition, federal food assistance is available to residents in those seven counties who had high-water or lost power in their homes — or who had reduced work hours or lost their job because of the flooding.