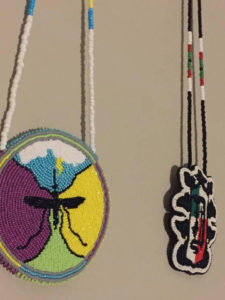 A Meskwaki artist and writer is working to open a Native American gallery in Iowa City.

Dawson Davenport, who has roots in Tama and Iowa City, says he wants to magnify voices of indigenous creators, musicians and writers as they address what it means to be Native American today. Davenport says they shouldn’t feel like they have to leave Iowa to get their work out into the world.

“I only feel like it’s necessary and right that they have a place to put that out there,” Davenport says. “Not just out on the West Coast, not just in California or Chicago or all these big cities, but right here in Iowa City, because we have stuff to offer.” Davenport says he’s designing the space to enable a range of artists to share their experiences and build a community.

“I wanted to create a space for us Native people so we can have our voice as well,” Davenport says, “so that we can share some of these things we go through as young native people because we’re dealing with different things than our parents were.” Davenport wants to emphasize artists from tribes that lived in what is now the state of Iowa, including Woodland tribes. He’s hoping to open the Iowa City gallery later this spring.