You are here: Home / Sports / Hall of Fame track and field coach dies 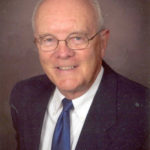 The man known to many as “Raff” is regarded as one of the greatest high school track and field coaches in the state of Iowa. As head coach of Iowa City High School, he became the first coach to win 10 Iowa high school state championships. He was elected to the Iowa Track Coaches Hall of Fame in 1997 and retired in 2003. Iowa City High’s track has since been named John Raffensperger Track.

Raff returned to the track in 2007, joining the Hawkeye program with former prep standout and current Iowa head coach Joey Woody. The 2019 season was his 13th on the Hawkeye coaching staff.

Raff worked on the Iowa football and basketball statistical crews for 50 years. In 2012, he was named an honorary letterwinner at the University of Iowa. His father, Leonard Raffensperger, was Iowa football head coach from 1950-51.