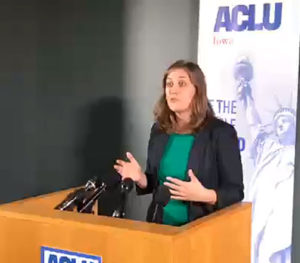 The ACLU of Iowa is challenging the latest version of the state law that seeks to prevent people from going undercover at livestock production or packing facilities.

A federal judge ruled in favor of the group in its lawsuit against the first version of the so-called ag-gag law. ACLU Iowa legal director, Rita Bettis Austen, says the new law is just slightly different than the first. “Whereas the old struck down ag-ag law purported to crimilinalize agricultural production facility fraud, ag-gag 2.0 purports to criminalize agricultural production facility trespass,” Austen says.

She says the new law has the same issue as the old one. “It targets squarely protected speech — especially using undercover investigative methods,” Austen says. “So, it criminalizes using deception to gain access to an agricultural production facility, or employment at that facility with the intent to cause harm.”

The harm referred to is the harm to a businesses reputation or economic harm caused by the reaction to the things revealed by undercover investigations. “This type of harm that’s targeted and criminalized is precisely the type of economic harm and reputational impact that the First Amendment protects. Exposes, protests, boycotts,” Austen says.

The second law was signed by Governor Kim Reynolds on March 14th. Austen says this law’s limited scope also makes it illegal. “The way that the law singles out the agriculture industry for this special type of protection from reports or negative press about it — is unconstitutional as an impermissible content and viewpoint-based restriction,” she says.

A state lawmaker said during debate that the new law was based on an Idaho law that withstood a legal challenge. Austen says that is not correct. She says the one area of the law that can stand is the portion that prevents someone from harming someone at a business or doing physical damage to a facility. “We are not for example, challenging the part of the law which criminalizes access with the intent to cause physical harm. That type of vandalism is a type of injury that is not protected by the First Amendment,” Austen says.

The first law is on hold while the state appeals the ruling. The second law went into effect as soon as the governor signed it, but Austen says they will also seek an injunction against it while the case is heard.

Governor Kim Reynolds released this statement on the lawsuit:

“We are working with the Attorney General’s office to ensure this legislation that supports farmers is upheld. The Ag Trespass bill is designed to protect Iowa farmers from safety threats or biosecurity risks that untrained people on their property may cause,” said Gov. Reynolds. “I am committed to protecting Iowa farmers and ensuring the safety and security of their livestock.”

(This story was updated to add the statement from the governor)