You are here: Home / News / It doesn’t end well as semi, car drive around flood barricades in Fremont County 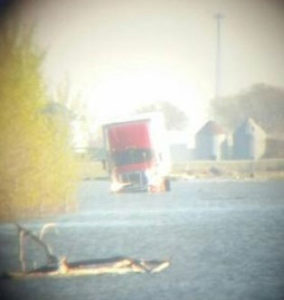 A night vision camera shows the semi in the river.

The drivers of two vehicles who disregarded flooded road barricades in southwest Iowa paid for their errors in judgment on Saturday.

Deputies with the Fremont County Sheriff’s responded to two incidents of vehicles inside the flood zone Saturday morning. Christopher Hawes, of Coffeyville, Kansas, reported his vehicle had hit a retaining wall and was in the water.

The car was westbound on Highway 333 at around 1:40 a.m., when it went over the temporary levee and ended up nose first in the water.  Hawes was cited for failure to obey a traffic control device. And a deputy found a semi in the flood water off Highway 2 on 195th Avenue.

A boat was called in to rescue the driver of the semi, who had driven past two barricades as he was traveling south on 195th Avenue in the flood water. His rig went off the west side of the road and became stuck on the shoulder. 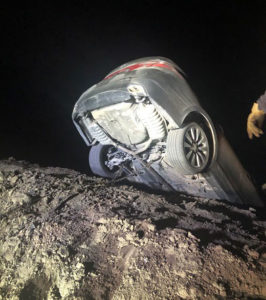 A Kansas man’s car ended up stuck on a levee after driving around a barricade.

The man from Minnesota was cited for failure to obey a traffic control device and driving through a safety zone, as well as being in an evacuated area.

(By Ric Hanson, KJAN, Atlantic/photos from the Fremont County Sheriff)