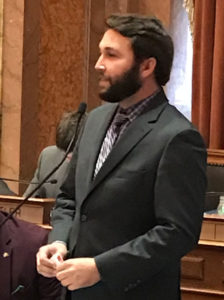 The governor must now decide whether sports betting should be legal in Iowa.

Tonight, the Iowa House gave final legislative approval to a bill that would let the 19 state-licensed casinos take wagers on professional and college sports. Representative Bobby Kaufmann, a Republican from Wilton, said many Iowans want the freedom to do this legally.

“Right now, there is a rampant black market going on where tens of millions of Americans are betting on sports,” Kaufmann said. “…I believe sticking our heads in the sand and doing nothing is not an option.”

Some casinos have been planning to set up “sports book” areas, but most of the betting would be done through a smart phone app. Iowa is among several states moving to legalize sports betting after a U.S. Supreme Court ruling last year made it possible.

“Some of us feel that it’s important that we get in front of this as it’s beginning…make sure we have the guidelines and the structure set up to make sure that this is run fairly and accurately for those who take part,” Representative Dennis Cohoon, a Democrat from Burlington, said.

The bill passed the Senate late last week and 67 members of the Iowa House voted for it tonight. Thirty-one members of the House voted against legalized sports gambling. Representative Sandy Salmon, a Republican from Janesville, said it’s a “foolish, misguided and ill-advised” move.

“This bill will usher in the biggest expansion of gambling in Iowa history,” Salmon said.

Representative Scott Ourth, a Democrat from Ackworth, said wagering on sports is particularly addictive to the young.

“I don’t care whether the legislature anoints it. I don’t care who puts their magic wand on it or tries to say that it’s o.k.,” Ourth said. “Where I come from, it’s still a vice.”

“As I understand, horse racing is a dying gamble. Dog racing is dead and the casinos are struggling,” Gassman said. “What a great way to drag in the next group of gamblers — sports betting.”

At the close of House debate, Kaufmann said keeping sports betting illegal will not make it go away and this bill sets up consumer protections for bad actors.

“Hoping that people get help when they’re placing bets in dark alleys with bookies whose collection is a threat to knee-cap you isn’t good for anybody,” Kaufmann said.

The bill also allows Iowans to claim prizes in “fantasy sports” leagues connected to the performance of professional athletes from a variety of teams.