You are here: Home / News / Artists to create works in 20 parks in preparation for State Park Centennial 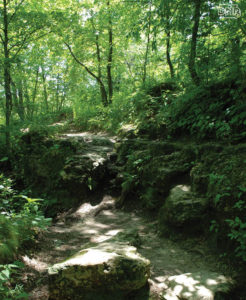 The Iowa Department of Natural Resources, the Iowa Arts Council and Iowa State University are teaming up to bring 20 artists to 20 state parks this summer for project to celebrate next year’s State Park Centennial.

They will create art projects in the selected state parks for a traveling exhibit to mark the 100 year mark since Backbone State Park was dedicated.
“There had been arrangements to dedicate that first state park — Backbone State Park up in Delaware County — in 1919, but weather delayed the original dedication ceremony,” according to Michael Morain of the Iowa Department of Cultural Affairs.

The graduate student artists are from Iowa State University’s colleges of Design, Agriculture and Life Sciences and Liberal Arts and Sciences.
He says the artists will create works throughout the year that will be curated into a traveling exhibit that will travel around the state to celebrate the centennial.

Morain says the parks chosen include all the various features available across the state. “The 20 parks were selected to give a good geographic variety and landscape variety,” Morain explains, “so that artists will have lots of different types of landscapes to work from and to draw inspiration from.”

Morain says the artists will be in the parks until this August and you are invited to check them out. He says they will conduct public workshops and you will be able to follow their work on social media at #20Artists20Parks and #IowaArts. “We also just encourage people to go visit the parks throughout the year — and if you bump into an artist — that’s a bonus,” Morain says.

There is more information on the “20 Artists 20 Parks” program at www.iowaculture.org and at www.iowadnr.gov.