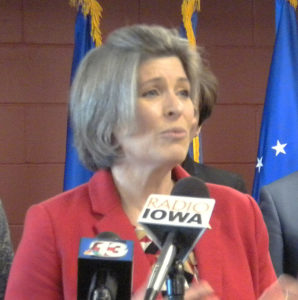 Iowa Senator Joni Ernst says it will “backfire” against Democrats if “far left” members in the U.S. House pursue impeachment against President Trump.

“I think it will solidify a lot of the folks here in Iowa that continue to support President Trump,” Ernst says. “…I think they’re going to overplay their hand here and I think it will seal the deal for a Trump presidential win here in 2020.”

Ernst, a Republican, will be on the 2020 ballot, too, as she seeks a second term in the U.S. Senate. Ernst plans to use her annual “Roast and Ride” fundraiser on June 15 of this year to formally launch her bid for reelection. By the end of March, Ernst already had $2.8 million in her campaign account for her 2020 campaign.

“I feel that I am well prepared to take on this challenge,” Ernst said.

This Wednesday in Williamsburg, Ernst will participate in a town hall meeting about the impact Trump Administration tariffs have had on Iowa manufacturing companies.

“The tariffs that we’ve had have been really hard on a number of not only Iowa farmers and ranchers, but also our manufacturing businesses,” Ernst says, “so hopefully as we continue to move forward in the trade space, hopefully we will start to see those tariffs lessen or be removed completely.”

Ernst predicts “a number of trade deals” will be completed before the 2020 election. Ernst made her comments during an interview with Radio Iowa.