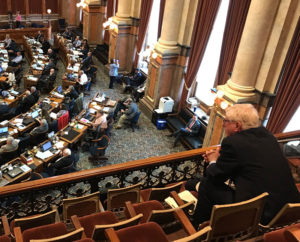 Iowa Attorney General Tom Miller, a Democrat, soon may have to seek permission from Republican officeholders to join lawsuits outside the state of Iowa.

Republicans in the Iowa House like Representative Gary Worthan of Storm Lake are upset with Miller’s participation in lawsuits challenging Trump Administration policies.

“The attorney general’s client is the people of the state of Iowa, but does that election give him carte blanche to do whatever he cares to do?” Worthan said. “We don’t believe so.”

Miller sat in the House balcony and watched the House debate. Miller said filing lawsuits is a fundamental function of the office he’s held for 37 years.

“I’m an independently elected official, given these fundamental powers,” Miller told reporters this evening. “…No other state does this. I think that tells us something as well.”

The plan now goes to the Republican-led Iowa Senate for a vote.