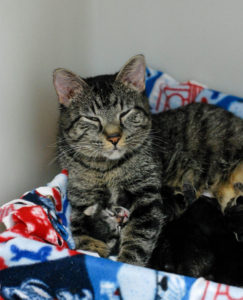 One of the cats seized by the ARL in Des Moines.

The Animal Rescue League of Iowa reports it took 26 cats and kittens from a Des Moines apartment Tuesday.

The ARL says the 26 animals were in a one-bedroom apartment that reeked of urine and some of the animals badly needed medical care. Animal Control officers report that the owner had thrown some of the cats out of a window before they arrived.

ARL says more than half of the animals are kittens under five months old. They are treating the animals for various infections and flea infestations.

The resident of the apartment has not been identified and charges are pending.