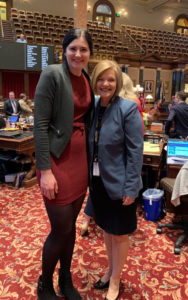 Iowa basketball star Megan Gustafson was in the House and the Senate today as Iowa legislators passed resolutions recognizing her achievements. Senator Joe Bolkcom of Iowa City read some of the stats from Gustofson’s senior year.

“She became a consensus first team All American,” Bolkcom said,”…and became the 4th player in women’s basketball history to score a thousand points in a single season.”

Lawmakers read through the many awards Gustafson won and also praised her for being a two-time Big Ten Academic All-American. Senator Zach Wahls of Iowa City read the closing lines of a resolution honoring Gustafson.

“The Senate hereby recognizes and congratulates Megan Gustafson for her outstanding career at the University of Iowa and wishes her continued success during her Women’s Basketball Association career,” Wahls said.

The same document was read aloud in the House. Gustafson got long ovations from lawmakers, their staff and visitors watching the proceedings.