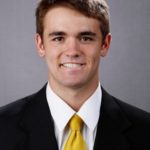 In a 12-inning, four hour and 17 minute game, the University of Iowa baseball team walked off Milwaukee, 5-4, via a Justin Jenkins walk-off solo home run on Tuesday night at Duane Banks field.

It was Iowa’s 13th comeback win and fourth walk-off win of the season to move Iowa to 24-15.

In Iowa’s longest game of the year, the Hawkeyes used 10 pitches. Senior Shane Ritter who relieved freshman Drew Irvine in the top of the 12th, earned the win. Freshman Duncan Davitt was Iowa’s starting pitcher.

The Hawkeye pitchers gave up five hits and three runs in the first two innings, but settled down after that, allowing only one run in the seventh inning and one run in the 11th.

The Hawkeyes travel to Columbus, Ohio, for a three-game series against Ohio State, starting Friday with a 5:35 p.m. (CT) first pitch at Bill Davis Stadium.