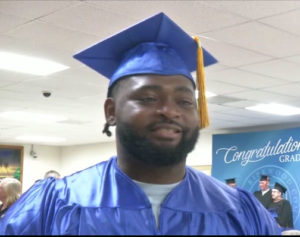 Hundreds of graduation ceremonies will take place in high school auditorium, gyms, or even on the football field in the next few weeks — but none were like the one held Wednesday at the Anamosa State Penitentiary.

Twenty-six inmates were recognized in the prison visiting room for earning their high school diploma, passing high school equivalency tests, completing an apprenticeship program, or earning a bachelors degree while serving their time. Inmate Lamont Coleman told KCRG TV about the experience of walking up and getting recognized. “It was a nervous moment. The most nervous I’ve ever been in my entire life,” Coleman says.

Instructor Patti Bammert says the 26 inmates were given another chance at academic success, and the degrees or certificates they have earned will make for a smoother transition to life after they complete their sentences. “These men, many of them just made one mistake, that was a big mistake that got them here,” Bammert says, “they deserve a second chance, they deserve a third chance.”

That extra chance is a way for the jail to rehabilitate, rather than just punish. Inmate Robert Marsh told KCRG TV their success proves the perceptions of prisoners wrong. “Sometimes people think about an incarcerated individual and they think it’s over for us. They are not going to learn anything while they are in there — or they are going to get back doing the same thing,” Marsh says.

Coleman says he never thought he would have the chance to go back to school to get a diploma. “This just proves that anything is possible,” Coleman says.