You are here: Home / Education / University of Iowa researchers weigh in on Mars tremor 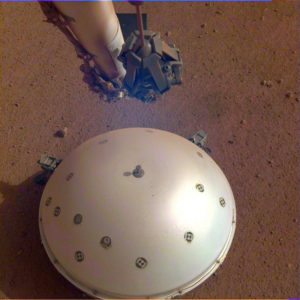 The InSight probe’s domed seismometer on the surface of Mars. (NASA photo.)

Scientists at the University of Iowa are joining the debate about data coming back from NASA’s Mars InSight spacecraft on the Red Planet’s surface.

The lander has recorded what’s believed to be the first-ever “marsquake.” Bill Barnhart, a professor in the U-I Department of Earth and Environmental Sciences, says it’s an earthquake on Earth, so “marsquake” makes sense.

“That’s the term that people are using right now,” Barnhart says. “If it’s not a marsquake, I’ve also heard the term mars-shimmy thrown around because it’s not exactly clear at the moment what the cause of the signal was.” The tremor on Mars was recorded on April 6th and while it was so minor it likely wouldn’t even have been detected on Earth, it’s prompting a lot of conversation among the experts.

“Here on Earth, the majority of earthquakes are caused by the grinding of crustal plates past each other, but plate tectonics doesn’t occur on Mars, at least not anymore,” Barnhart says. “This gives us some clues as to what’s happening in the interior of Mars.” The spacecraft’s domed seismometer is shielded from Martian elements like the wind or sandstorms, so the cause of the trembling appears to have come from inside the planet.

Even though Mars formed billions of years ago, Barnhart notes it’s likely the interior of the planet is still in the process of cooling off. “It’s thought that these sorts of events are caused by a thermal contraction of the planet,” Barnhart says. “As the planet cools, it contracts and that causes stresses which can cause earthquakes, or marsquakes.”

Scientists are debating what caused the seismic event. “Here on Earth, we use earthquakes kind of like a doctor would use an MRI or a CT scan to image the interior of the planet itself,” Barnhart says, “so this is an important step in better understanding the structure of Mars.” NASA has a long history of monitoring the rumblings of other heavenly bodies.

Apollo astronauts placed five seismometers on the Moon in the late 1960s and early ’70s which measured thousands of quakes on our planet’s largest satellite.