You are here: Home / News / Lawmakers heading to Iowa capitol for 2019 session close-down

The scorecard for the 2019 Iowa legislature is nearly complete, as lawmakers head into the weekend intending to conclude this year’s work. 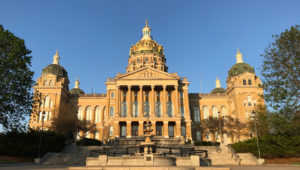 “I’m really satisfied with this year. I think we’ve gotten a lot of good work done. You know, we came in wanting to make sure we did something with mental health. Well, children’s mental health was a big deal and setting up the infrastructure is step one,” Upmeyer said. “We all get that’s not the end of the story, but it’s a really good beginning.”

Republicans hold a majority of seats in the Iowa House and Senate, so Republicans like Upmeyer and Senate Majority Leader Jack Whitver of Ankeny set the debate agenda.

“Workforce is a huge issue here in the state of Iowa. Our unemployment’s the lowest in the country, so that creates problems in our workforce. Future Ready Iowa and the funding that we allocated for that will be extremely important,” Whitver said. “In the Senate, unfortunately it didn’t pass the House, but we started on welfare reforms to get people out of our welfare programs and into the workforce. I think that’s a conversation that we need to continue to have over the next year.”

“There are a lot of very practical things we’ve done…a lot of landmark legislation that may not grab as many headlines sometimes, either, but are really significant to the future of the state of Iowa,” Hagenow said.

“We have missed an opportunity to even start the discussion,” Prichard said, “…so that’s going to fester.”

And Prichard said the spending increases Republicans approved for public schools aren’t keeping up with inflation.

Some of Republican Governor Kim Reynolds’ priorities have failed to advance through the Republican-led legislature– although there’s always the possibility they could be revived in the closing hours of the legislative session. The House overwhelmingly endorsed the governor’s proposed constitutional amendment restoring felon voting rights, but it has stalled in the Senate. Senator Republicans voted to make changes in the commission that nominates Iowa Supreme Court Justices and members of the Iowa Court of Appeals, but House Republicans lacked the 51 votes necessary to get it done.