You are here: Home / Health / Medicine / Time to turn in those unused prescription drugs 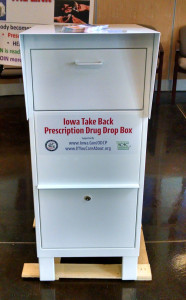 The spring national prescription drug take back day is Saturday.

He says this is a chance for everyone to make a difference in preventing drug abuse. “Some of it if left around — if misused or abused — can be problematic. Up to and including tragically, overdose deaths from opioids,” Woolery says.

Woolery encourages you to search through your medicine cabinet and other areas for unused prescription drugs. He says you can turn in any type of drug. “What they do not want to have to deal with are sharps or essentially illegal substances,” according to Woolery. “So, anything that would be totally illegal like marijuana or heroine, those types of things, it’s not designed for that. Nor is it designed for the needles.”

Woolery says it has gotten easier to drop of the drugs as more sites have been added through the years. He says they should have around 100 sites for Saturday and there are some 240 permanent take back receptacles across the state. “There’s at least one in every county, and I think it’s more than that now. That’s grown tremendously. About half of those are in local law enforcement centers, the other half…they’re located in pharmacies.”

The unneeded drugs are taken away by federal officials. “All of the medications that are collected as part of the take back program are eventually incinerated, I think somewhere in Texas. The DEA collects that and it gets incinerated — that’s where most of it goes,” Woolery explains. He says some pharmacies have contracts with companies to get rid of the drugs dropped off at their facilities.

The take back runs from 10 a.m. until 2 p.m. You can find a nearby collection to drop off your unused prescription drugs at: www.DEATakeBack.com or by calling 800-882-9539.