You are here: Home / News / Winter not giving up as snow predicted for parts of Iowa 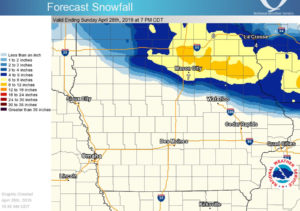 Meteorologist Roger Vachalek, at the National Weather Service in metro Des Moines, says a large and powerful winter storm system is approaching.  “That’s going to be moving rapidly across the central plains tomorrow, arriving into Iowa late tonight along with rainfall,” Vachalek says. “Tomorrow morning, it changes over to snow in the far north and it’s going to be a wet, heavy snow.”

Travel could be sketchy due to the deep snow and reduced visibility. Seventeen counties across northern Iowa are under a Winter Storm Watch, most of them from 7 a.m. to 7 p.m. on Saturday.

“We are expecting the possibility of a band of wet, heavy snow in the far northern and northeastern counties,” Vachalek says. “Some snowfall amounts may approach eight inches or more right along the Minnesota-Iowa border on north into Minnesota. Along with that, some very strong winds expected.”

Wind gusts could reach 40 miles-an-hour, or more, while temperatures may fall into the 20s by Saturday night. Keep up with the forecast at weather.gov.