You are here: Home / News / Saturday ending may be possible for 2019 Iowa legislative session 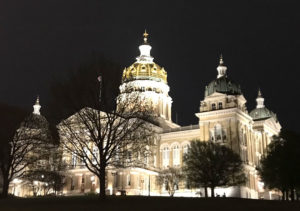 In the closing hours of the 2019 legislative session, Republicans in the Iowa House have scaled back their plan to change the commission that nominates Iowa Supreme Court Justices and members of the Iowa Court of Appeals.

Representative Steven Holt of Denison has been the House GOP’s point person on the negotiations.

“I think our initial proposal was very good, but we did not have the support to get there,” Holt told reporters Friday.

Under this new plan, the senior judge on the Iowa Supreme Court will no longer be part of the commission — and the governor will appoint eight rather than nine commissioners. Unlike the original plan, attorneys will still elect the eight other commission members. Perhaps the most significant change will require Iowa Supreme Court Justices to vote every two years to determine who among them will be chief justice. Current Chief Justice Mark Cady was elected in 2011 and under current practice would serve as chief until he retires.

“There can be a big difference in the court between when somebody was elected seven or eight years ago,” Holt said. “The members of the Supreme Court ought to have as their leadership somebody that reflects their current priorities and views, just like we have in here every two years.”

“I don’t think the legislature should be involved, nor does the legislature have the authority to decide how the chief justice is picked,” Prichard told reporters shortly before midnight.

Prichard, who is an attorney, said Democrats oppose any change to the commission that reviews applicants and nominates a slate of judges to the governor.

“The courts are a model for the country. They are prized for their non-partisanship,” Prichard said. “This is definitely politicizing our courts. This is not the direction the state of Iowa wants to go.”

“That organization has a different goal in mind. Their business interests are totally the opposite of the state’s interests,” Representative Sandy Salmon, a Republican from Janesville, said during a Radio Iowa interview.

“You shut your minds off to whatever good they have done in your communities,” Mathis said during Senate debate Friday. “You hear the words: ‘Planned Parenthood,’ and you think evil.”

Republicans in the legislature also plan to prohibit the state’s Medicaid program from covering gender reassignment surgery. Senator Mark Costello, a Republican from Imogene, said most Iowans consider it an elective rather than medically-necessary procedure.

“I do not think most taxpayers want to pay for this type of surgery,” Costello said during Senate debate.

A coalition of groups held a Friday afternoon rally at the statehouse to voice their opposition to the plan. Alexandra Gray of Des Moines, a transgender woman, called the proposal frightening.

The Senate took votes on nine bills yesterday and will reconvene today at 9 a.m. The House voted on three bills, but Democrats spent much of the day in private meetings to review and discuss the new G-O-P plans. At about 12:30 a.m. this morning, the House adjourned, planning to reconvene at 8 a.m. for what could be the final day of the 2019 legislative session.