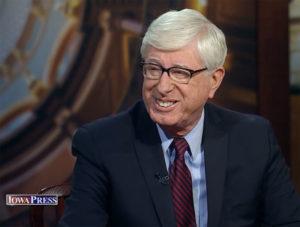 Iowa Attorney General Tom Miller, a Democrat, says joining lawsuits against the federal government is part of a system of checks and balances and he’ll ask Republican Governor Kim Reynolds to reject a plan to restrict his authority.

“I brought those lawsuits only when I thought the law and the interests of Iowans indicated that I should do that,” Miller says.

Late last week Republicans in the legislature voted for a plan that would force Miller to get permission from Republican office-holders to be part of a lawsuit in any federal court. The plan is tucked in a budget bill and the governor could use her item veto authority to reject the proposal.

Republicans in the legislature say Miller has politicized his office by joining other attorneys general in suing the Trump Administration on several occasions — a charge he rejects.

“Absolutely not. I never would do that. I take this office very seriously…nothing is more important in the law than litigation,” Miller says. “I did bring one case, with Governor Branstad, against the Obama Administration.”

That multi-state lawsuit challenged federal “Waters of the U.S.” rules, which Iowa farmers complained would expand federal regulation of farming practices. Miller says Republican attorneys general also used their authority to sue the Obama Administration on a host of other issues. Miller cites polls which he says show he’s “on the majority side of opinion” in Iowa regarding many of the legal challenges he’s joined recently.

“Also, you know, I have a record as attorney general and I had two years of litigation against the Trump Administration,” Miller says. “I faced the voters with that in mind and they overwhelmingly re-elected me.”

Miller, won re-election to a 10th term in 2018, made his comments on Iowa Public Television’s “Iowa Press” program.