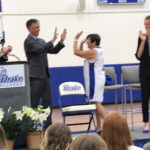 “I highly respect Jennie Baranczyk and the Drake women’s basketball program, and I believe that when women empower women, there is no limit to the impact we can make in the lives of these incredible student-athletes,” Glazer Burt said. “It is my joy and privilege to make this investment in their future.”

A portion of the gift will be used to endow the Suzie Glazer Burt Women’s Basketball Head Coach position and strengthen the Bulldogs’ dynamic and passionate leadership under head coach Jennie Baranczyk. Burt’s generosity also enhances the program’s commitment to women empowering women by providing unparalleled support and experiences to its student-athletes while inspiring others to continue their support of Des Moines’ Hometown Team.

“We are overflowing with gratitude to Suzie for this gift as it is another example of her incredible support for our great University,” President Marty Martin said. “Suzie and Greg, as well as Suzie’s family, have long been key contributors to supporting Drake’s mission, and today’s gift will empower and inspire our women’s basketball student-athletes for years to come.”

Glazer Burt has been a champion of Drake University along with her late husband, Greg, for decades. Their generous investment in Drake Athletics helped fund the expansion of Shivers Basketball Practice Facility, and the practice courts in that facility were named in honor of the Burt’s and Suzie’s mother, Maddie Levitt. Their generous gift to Drake University in 2016 allowed for the establishment of the Suzie Glazer Burt and Gregory Burt Boys & Girls Club, which is set to open in August 2019.