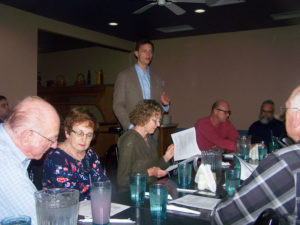 Sand says he’s seeking money-saving ideas from the public and he calls it the “Public Innovations and Efficiencies” or “PIE” effort.

“It ought to be as popular as pie. The idea is if we can save money by doing things a different way at the local level, the county level and the state level, then we ought to do it,” Sand says. “This is an office that has always had the authority to make these kind of recommendations, to talk about these kind of issue and has never really done it and I’m just very excited to have the opportunity to have been elected and get this project off the ground so that we’re saving taxpayer money wherever we can.”

Sand says he’s searching for “common sense” ideas that might be overlooked as a means to save the taxpayer’s money, like unplugging electronics at the conclusion of a work day. Sand intends to come up with a check list to measure progress on efficiencies.

“We’re going to have counties and cities and state departments fill this check list out every year and then you’ll be able to track the progress for your county, track your progress for your town through looking at how they’re doing in our ‘PIE’ contest every year,” Sand says.

Sand says he’s already made an efficiency move in his own office that will save at least $12,000 a year. Lat year, the office staff spent more than 300 hours printing and binding audit reports.

“Because the office, every time it conducted an audit, when they were done with it, they would print it out. They would bind it with some nice binders and then they’d do that for as many copies as they needed to give one to each elected official whether it was a city county or board of supervisors. Then on top of that, they’d mail it to them,” Sand said. “We’re not doing that any more. We’re going to email them a pdf and if they want to print it out, that’s fine. They can print it out.”

Sand says his office also will save on all the postage costs associated with mailing binders to hundreds of city and county officials each year.