You are here: Home / Fires/Accidents/Disasters / Getting back to flooded homes not easy for southwest Iowans 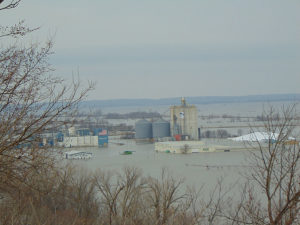 Even though evacuation orders are being lifted, many southwest Iowans still can’t return as standing water is making their homes unreachable.

Sheri Bowen, a spokeswoman for Mills County, says people are mostly trying to get back to their houses to assess the damage caused by the record Missouri River flooding that started more than a month ago. “They may decide to wear their hip waders and go in and get their prized possessions that they weren’t able to take with them,” Bowen says, “but no one is expecting anyone to move back in at this point.”

The county did an unofficial survey asking people whether they would return home. About half of the families that answered said they were unsure about their next steps, while ten-percent said they would definitely leave. South of Mills County, Hamburg residents are allowed to return to their homes in Fremont County, but in unincorporated areas of the county, about 250 families cannot go back yet.

Fremont County Emergency Management Coordinator Mike Crecelius says there’s still standing water in the south end of Hamburg. “That is where the water hit the worst and was the deepest,” Crecelius says, “so I think that those folks are probably going to be looking for some place else to be living instead of moving back in there.” The mayor of Hamburg lifted the city’s partial evacuation order last week.

The communities of Percival, Bartlett and McPaul are still evacuated.