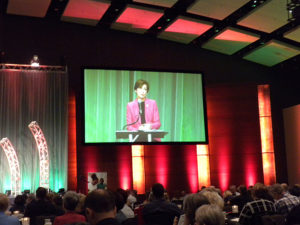 Governor Kim Reynolds is still not making any definitive statements on whether she will sign or veto some of the high-profile bills that passed in the just completed legislative.

Reynolds talked with reporters today and says many of the bills have not gotten to her desk following the close of the session Saturday. “We’re going to sit down with the team and we’re going to take a look at the bills that passed both chambers and were sent to me to sign,” Reynolds says. “People have an opportunity to weigh in — because of the timing that they passed — we have 30 days. We won’t wait to the end, some will be able to get done sooner rather than later. We will go through the process and start working through some of that stuff.”

Reynolds was asked about bills that ban Medicaid from paying for transgender surgery, one expanding the medical marijuana law,  and whether she would sign a bill that limits the power of the Attorney General to get involved in lawsuits outside the state. “We’re going to sit down with the policy team and we’re going to go through each bill that was sent to my office and we are going to make those decisions going forward,” Reynolds says. 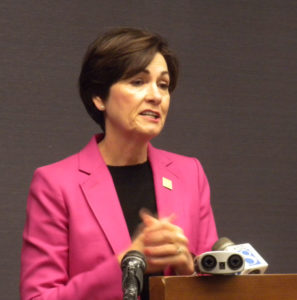 Reynolds was asked if groups lobbying for and against the bills now that they have passed will make a difference in her decision. “That’s what the whole legislative process is about — think about it — that is actually Iowans’ opportunity to come in and work with their legislators to make the case. That is why when a piece of legislation is filed it never looks like it did when it was filed — because Iowans have an opportunity to weigh in and voice their concerns and or their reasons for supporting it,” according to Reynolds. “So, that has happened and we are still receiving calls and people have an opportunity to weigh in.”

One of the things Reynolds sought that didn’t happen was over-the-counter sales of birth control.  “Well, I am going to continue to come back and fight for the contraceptive legislation that I put forth this year, so I am not going to give up on that. I didn’t get everything I wanted. It’s not going to surprise you that I am going to be coming back and I am also gonna be fighting for amending the Constitution to give felons the right to vote. Senator Joni Ernst is working at the federal level on a similar piece of legislation that would actually make it (birth control) over the counter,” she says.

Reynolds was asked if she could approve the bill that would take away funding from Planned Parenthood for sex education programs, while pushing for over-the-counter birth control. “There are a lot of providers that provide that service. There’s not just one in the state that provide that service, there’s actually several,” Reynolds says.”But, we are going to take a look at the legislation and will make that decision going forward.”

Reynolds spoke with reporters after giving the opening remarks at the Future Ready Iowa Summit being held in Des Moines.