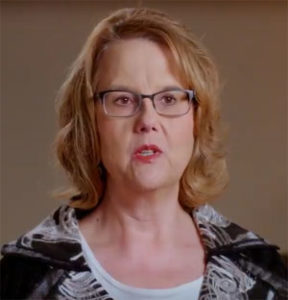 The director of the Family Crisis Center will be honored at an open house at the Ridge in Sioux Center tonight after being honored recently at the annual National Crime Victims Service Awards Ceremony in Washington, D.C.

Shari Kastein received the Special Courage Award. “That is actually given to an individual who demonstrates extraordinary bravery in the aftermath of a crime and who has performed courageous acts on behalf of other victims and potential victims,” Kastein says. Both Kastein and her daughter, Melissa, were victims of domestic violence which lit a fire in Kastein to dedicate her life to help abuse victims. “When I dream about these programs and projects and things that will really benefit others — that’s been the joy that this whole process has been,” according to Kastein.

Kastein has been doing this work for a long time and has learned you can’t get comfortable “In doing it for over 30 years now I think I’ve seen it all and then the next day somebody else comes in with a new story and or a different tragedy and I’m ‘okay we are here to help.’ And the doors are open, and our hands our hearts and our minds are open — let us receive you in good grace and let us see what we can do to help,” Kastein says.

Kastein received the award in Washington, D.C. April 12, where she met with U.S. Attorney General William P. Barr. Kastein gives credit for the success of the Family Crisis Center to those around her, particularly her staff, but also her daughter.

The Family Crisis Center operates the Iowa Victim Service call center. If you are a victim of domestic violence, sexual violence, human trafficking, homicide, and any other violent crime, and need help – call the hotline at 1-800-770-1650 — and it is available 24/7 to provide support and statewide resources.