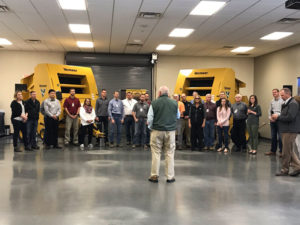 U.S. Ag Secretary Sonny Perdue’s visited Iowa Monday. During a stop in Pella, Perdue was asked about an updated total on the agricultural damage done in the state by flooding.

He says the total continues to be added up — but said the most important thing is for Congress to approve disaster aid. “Congress is back into session this week, I am hoping they will address that. Certainly from the midwest flooding, to the hurricanes in the southeast, to wildfires in California, and get what people need,” Perdue says.

He was asked about covering the grain in Iowa that was lost to flooding. “Hopefully there will be a provision in there that dealt with that — there’s not really an insurable opportunity within U.S.D.A. programs there. That’s really what we need,” according to Perdue.

Perdue stopped at Vermeer Manufacturing, which was heavily damaged by a tornado last July. Perdue says the recovery effort at Vermeer is indicative of what Iowans do. “These are people that they don’t wait for people to come and provide help for them,” he says,”they help themselves while others come and help them as well. That’s what’s great about this, the recovery.”

Part of Perdue’s visit was to highlight the importance of the U.S. Mexico Canada Agreement (USMCA), which replaces NAFTA. Iowa Senator Chuck Grassley has said he doesn’t think the new agreement can be passed without tariffs being lifted by the administration. Perdue says he thinks that may be possible if it moves forward. “In every aspect, whether it be labor, health, safety, ag access, all those things, chapter by chapter, verse by verse, this new USMCA agreement is better than the original NAFTA. I just hope Congress will once again put politics aside and vote for America and ratify this,” Perdue says. “I believe the president if at some point if that is the case, could be persuaded to go back to a quota system.”

Perdue was asked if there is potential to continue increasing pork exports to China with the problems they’ve been having with African Swine fever. He says a trade deal with China would do that. “Not only in pork, but certainly in beef and poultry, beans as well as corn. If we get the deal that’s looked at now with the countervailing duties on DDG’s Iowa corn farmers as well,” Perdue says. ” So, It’s a huge potential. I just don’t want to raise expectations that it’s a done deal.”

Perdue also made a stop in Johnston to visit the  Corteva Agriscience Mendel Greenhouse.