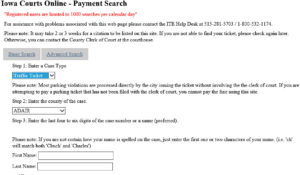 You can now pay multiple fines at one time through the Iowa Courts Online website.

There’s a new feature that will help those using the state’s busiest website complete transactions faster.

Iowa Judicial System spokesman, Steve Davis, says there’s now a shopping cart feature on the pay site for Iowa Courts Online that allows you to bundle court fees. “You can pay multiple fines at one time instead of jumping back and forth between sites and having to do them one at a time,” Davis says.

He says you still start by searching for any fines you owe at Iowa Courts Online site.”And then you can click on the individual case numbers and dig a little deeper and find the financials, and you can just then go through and find one case and say you’ll pay that and add it to your shopping cart. And then go back to the list of cases if there is more and find another case and pay for that,”Davis explains.

Davis says the site allows for payments from all 99 counties — which makes it a heavily used site. “Iowa Courts Online is the most frequently visited website in state government,” according to Davis. Every year we have more than 538-million page views.”

Davis says there is still the option to pay the old fashioned way. “Some people still go into the courthouse and pay their fines and restitution — but most people do it online — and that’s one of the reasons why the shopping cart was added, for more convenience for those people who do pay it online,” Davis says. Davis says the shopping cart is similar to what is used on most other online sites.