You are here: Home / News / Davenport watching to see how much rain will impact flooded area 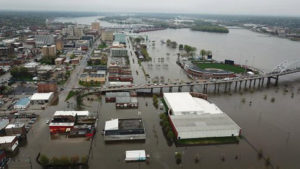 Business owners and residents in flooded downtown Davenport are crossing their fingers that the weather forecast is right.

Forecasters say more rain is expected, but not heavy rain, and the Mississippi River at Davenport should crest tonight a few inches below the all-time record, set in 1993. Another 16 businesses in the downtown had to abruptly close Tuesday afternoon when a Hesco flood barrier failed, inundating several more blocks along the riverfront and closing the Arsenal Bridge.

Some two dozen people were rescued by city fire crews using boats, some were plucked from cars and rooftops, though no one was reported hurt.

(Photo courtesy of the Weather Channel)