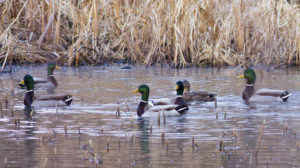 A special driving tour route through the Union Slough National Wildlife Refuge in northern Iowa will open this Saturday and end at sundown on Mother’s Day — Sunday, May 12th. Ed Meendering, the refuge manager, says the tour route will be open from sunrise to sunset.

“We recommend people bring a pair of binoculars or maybe a bird book,” Meendering says. “We have had a couple of sand hill cranes on the refuge here for about two weeks. A little bit unusual, we haven’t confirmed that they’re nesting, but we hope that they will on the refuge at some point in time.”

Meendering says water levels are pretty high at the refuge due to the wet weather this spring and past winter. That means animal life rather than vegetation is the main draw.

“We’ve been doing some prescribed burning. There’s some areas starting to green up from of that. Not a lot of other stuff coming up at this time,” Meendering says. “But people should see deer, pheasants, ducks, geese, trumpeter swans along the tour route.”

Union Slough is near Algona or about six miles east of Bancroft. The driving tour route is only open a couple of weeks each year. It starts at the refuge headquarters and takes visitors by wetlands, open water, and prairie habitat.

(By Brian Wilson, KLGA, Algona/Photo from the U.S. Fish and Wildlife Service)