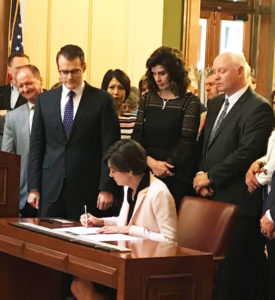 Governor Kim Reynolds has approved the outline for a children’s mental health system in Iowa.

“Today marks a major milestone for mental health in our state,” Reynolds said early this afternoon.Reynolds spoke to a large crowd in the statehouse rotunda moments before she signed the bill into law.”Big things happen when people come together for the common good,” Reynolds said.

The bill establishes a new 24-hour hotline parents may call to find mental health services for their child. It creates a new state board to oversee development of more options for children who need mental health care. It also serves as the starting point for finding new ways to finance that system.”By signing this legislation into law, we are lifting up Iowa’s young people by standing beside those who love them,” the governor said.

Reynolds credited a determined group of advocates for shattering misconceptions about mental illness and lobbying for action.”This was especially true for Mary Neubauer and Larry,” Reynolds said. “Through your love for Sergei and by continuously sharing his story and being his voice, you ensured that his memory lives on through others.”

Sergei Neubauer committed suicide in September of 2017. His parents, who attended the bill signing ceremony, weren’t expecting the governor’s comments.”To think of the impact of this little boy from Russia and everything that his life will have accomplished even though it was only 18 years long is a beautiful thing,” Neubauer said.

Sergei moved from a Russian orphanage to Iowa when Neubauer and her husband, Larry Loss, adopted him in 2009.”Thanks to all of the other families across this state who told their story — and hopefully they felt safe in telling their story because we told ours — because we do have to tell our stories, all of us do and when we do that and when we speak up, then things can happen,” Loss said. “I think this is a good indication where the citizens of the state of Iowa had a story to tell, they reached out to their legislators, they told it and action is occurring because of it.”