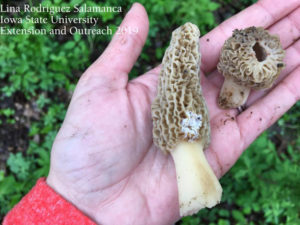 Signs of problems with morel mushrooms.

Iowans need to take even greater caution when hunting for morel mushrooms this spring as so much of the state is — or has been — flooded.

Lina Rodriguez Salamanca, a plant pathologist with the Iowa State University Extension, says even if you’re a seasoned morel hunter, be very careful before cooking up any of your rare treasures. “Inspect them thoroughly, inspect the morel specimen so they don’t have a slimy look, a water-soaked area, a fuzzy, powdery look,” Rodriguez Salamanca says. “All of that stuff would be good to avoid, things that don’t look pristine and normal. Any signs of decay would be good to avoid.”

Floodwaters often carry a range of chemicals, sewage and other pollutants, and even if the standing water is now gone, some of those harmful contaminants may be left behind. “Know the site. If it’s a site that is known to have a high risk of pollutants, I would recommend caution and avoid it,” Rodriguez Salamanca says. “Chances are, there may be a residue there.”

While the cool, wet weather may promote the growth of this year’s morel crop, other organisms thrive in the moist environment that can be unhealthy. She notes, mushrooms can act much like sponges, soaking up both the good and bad elements around them. “They have the ability to absorb and in some cases just accumulate what is around them,” Rodriguez Salamanca says. “They’re very good at extracting nutrients from nature including anything that we may have put in there.”

She says to avoid picking morels in areas where fish and animals have died, or in areas where there are animal droppings. And as always with wild mushrooms, make absolutely sure what you’re picking is a morel and not something poisonous.