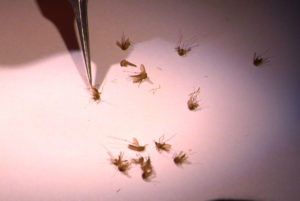 A study of some 15 years of data on mosquitoes in Iowa finds you are most likely to contract the West Nile virus from the pests buzzing around the western side of the state.

Iowa State University entomologist, Ryan Smith, says the research is the first time they’ve been able to get an idea of the pattern of West Nile transmission. “Those counties in the western region of the state seemed to be at much higher risk. And at least one of the other major conclusions from our study is that that also seems to correlate with the presence of a certain mosquito — Culex tarsalis — which is also found predominantly in that region,” Smith says.

Smith says the research indicates the ecology of the western counties is a big factor. “This species really kind of likes more kind of farmland area — especially that that is irrigated farmland. It really thrives in those little ditches and runoff that you might have associated with these areas,” according to Smith. “This Culex tarsalis isn’t really found in your kind of more urbanized areas. So, there is a big distinction that Culex tarsalis is usually found in these more rural areas.”

The ISU Medical Entomology Laboratory conducts yearly surveillance of mosquito populations, using a network of traps across the state that are regularly emptied and the mosquitoes inside are catalogued. Smith says they reviewed the Iowa data from between 2002 and 2016. and  the study mirrors those from Nebraska and South Dakota with this mosquito on West Nile transmission an he says it continues all the way to California. 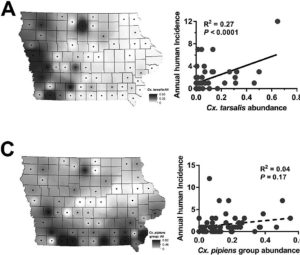 Dark areas show where the Culex tarsalis mosquito is found.

But Smith cautions that this does not mean you can’t get the West Nile virus from other mosquitoes in the state. “This mosquito seems to be a little bit better at transmitting West Nile virus — but it doesn’t mean that other mosquitoes that we have throughout the state aren’t also involved,” according to Smith. “So, there are several different mosquito species that can transmit West Nile, and we do find those throughout Iowa. So, our study doesn’t say that they are not involved — it just says the one that is most likely involved in human case is this Culex tarsalis mosquito.”

Smith says you should follow the state Health Department recommendations and use a mosquito repellent with DEET and cover up exposed areas when you are going to be out at times when any mosquitoes might be active.

Smith says the research answers some of the questions about West Nile transmission, but there are other questions, such as the impact of weather.
“We’re starting to understand how some of these factors influence it, but even 15 years of data isn’t fully enough I don’t think to really understand what is going on. There’s no doubt that weather patterns definitely have an impact on our mosquitoes and on transmission,” Smith says.

Iowa had 103 cases of the West Nile virus in 2018, with five deaths. The Department of Public Health says people who are infected with West Nile may not experience any signs or symptoms. Some people experience minor symptoms like fever and mild headache. Others, however, can develop a life-threatening illness that includes inflammation of the brain.