You are here: Home / Crime / Courts / Another group of sick cats found in a Des Moines home 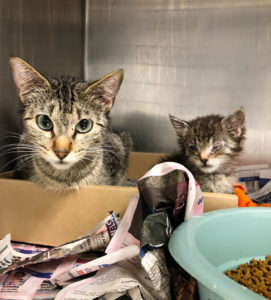 For the second time in one week, the Animal Rescue League of Iowa says it rescued several cats from a Des Moines residence.

ARL animal control officer, Joe Stafford says the 24 cats were found in a single-family home. “Fifteen adult cats and nine kittens. Those nine kittens were from two different litters and those cats were in horrific condition,” according to Stafford. “They were all soaked in urine, their medical needs, veterinarian needs were not being attended to.” One of the kittens later died.

This find comes after the ARL found 26 cats one week ago in a one-bedroom apartment. “I’ve been doing this work for a long time — over 18 years — and I will tell you it is very odd to have two cases exactly one week apart,” Stafford says.

He says adding more cats to the ones they were already taking care of puts a strain on their resources.
“These cats are very high-need obviously. We have to put a lot of time and effort into treating these cats and trying to get them healthy,” Stafford says.

Stafford says they had an issue with the woman owning too many cats under the city ordinance back in 2013, but she was taking care of them at the time. Stafford says they will likely seek some sort of arrangement with prosecutors to put conditions on the women when it comes to owning animals.

“If we being to look at that through the lens of collecting or hoarding — that is most often a mental illness. I mean, there is a lot of research out there that’s been done regarding these matters,” Stafford says, “and the sad fact is that these individuals are very, very likely to reoffend.”

You can make donations to the ARL’s Miracle Medical Fund to help with the care of the cats by going to the ARL website.