You are here: Home / Human Interest / New crime in Iowa: falsely claiming a pet is a service animal 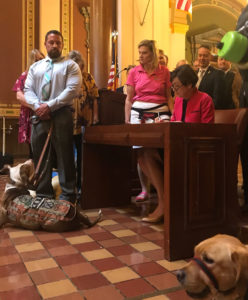 Governor Kim Reynolds has approved a new state law that forbids landlords from charging extra pet fees to a renter who has a service animal. In addition, people in a grocery store, restaurant or other public place who falsely claim their pet is a service animal can be charged with a simple misdemeanor.

Kevin Flack of Bettendorf is a combat veteran of the wars in Iraq and Afghanistan who has had “Frankie” by his side for three years.

“When I got out, I had a lot of troubles with re-integration…My central nervous system was trying to get used to being in an environment that it wasn’t kind of conditioned to,” he says. “You’d have panic attacks, other issues, nightmares. Frankie’d wake me up when I had nightmares. During panic attacks, he’d always stay with me. He helps you stay grounded.”

The law bans additional fees for renters who have a service animal or a service-animal-in-training.

“It takes so much in the training process to have a legitimate training animal that provides a service,” he says.

Flack says he’s seen how far people are willing to go in claiming a pet is a service animal.

“I’ve seen service peacocks come on planes, which I don’t understand. People with cats and Chihuahuas that are absolutely out of control,” Flack says. “Frankie’s a red-nosed German pitbull and he is one of the calmest dogs I’ve ever seen in my life and I’ll have people on a plane or in a restaurant or wherever else freak out because they see him — and they’ll be literally holding a Chihuahua that’s trying to bite him.”

Flack’s dog Frankie and a handful of other service dogs surrounded the governor as she signed the bill into law Thursday afternoon.