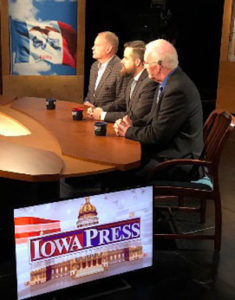 “They tinker with it and try to make it workable,” Walsh said this morning. “At this point, it’s like a piece of machinery. You can only repair it so many times. It no longer works.”

“No doubt there’s need for property tax reform. I don’t think the legislature accomplished what they wanted to accomplish,” Walsh said. “I don’t think it added any transparency.”

“When we go through our public process, we have three or four public meetings where people can come in, see what maybe the preliminary budget may be,” Donahue said. “If they wish to make a comment, they’re certainly welcome to do so. We have a public hearing that’s mandated when we do the final adoption. I don’t see that as a problem at all. It’s just adding, maybe, an extra step.”

Nevada Mayor Brett Barker was at the statehouse, lobbying against a previous proposal that included a statewide cap on property tax increases.

“Legislators listened. They made changes,” Barker said. “A lot of the unintended consequences we were concerned about were mitigated in the final version of the bill.”