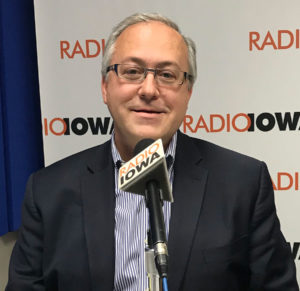 Former Republican Congressman David Young is aiming for a rematch in 2020, hoping to unseat the Democrat who beat him in 2018.

“It’s hard to run against someone who has a record, but now Cindy Axne has a record and it is not a good one,” Young told Radio Iowa this afternoon.

“Assessing the numbers, talking to folks, a lot of praying and then just watching what’s happening,” Young said. “Getting around the district, the voices and priorities of Iowans are not being heard right now.”

Young was first elected as Iowa’s third district congressman in 2014 and easily reelected in 2016. Young said his 2018 loss does not mean the district now leans Democratic.

“I think it’s always going to be a purple district,” Young said. “There’s a certain amount of folks that didn’t come out and now we’re seeing more attention to the next race. It will be a presidential race and that’ll kind of drive it from the top down.”

Young won 15 of the 16 counties in the district, but lost in Polk County — the district’s largest population base. Young said some Republican voters just didn’t turn out in 2018 because Donald Trump wasn’t on the ballot.

“We expect to get their support, but we’re not going to just rest on that,” Young said. “We’re going to fight for every vote in every county.”

Zach Nunn, a state senator from the Des Moines suburb of Bondurant, announced this morning he was going on a listening tour as he considers running in this district, so Young may face a Republican Primary in 2020.

Young’s opening critique of Congresswoman Axne includes a rap on her first vote — for a bill that, among other things, would have set up a public option for congressional campaigns if the candidate agrees to fundraising limits.

“Cindy Axne and her friends in congress voted right away to help themselves,” Young said.

Axne announced last week that she intends to seek reelection. She issued a written statement early this evening.

“Iowans made a clear choice in November,” Axne said. “…While I’m fighting in Congress to expand access to quality, affordable health care, Iowans won’t forget that David Young repeatedly voted to take away protections for people with pre-existing conditions. As I work to create good-paying jobs for middle class families, Iowans won’t forget that David Young voted to give tax breaks to corporations at the expense of crucial programs like Medicare, Medicaid and Social Security.”

In 2013, Young left his job as Senator Charles Grassley’s chief of staff to run for the U.S. Senate. He later switched and ran instead for Iowa’s third district congressional seat in 2014.