A wildlife biologist with the Iowa Department of Natural Resources is encouraging landowners to plant some food plots this spring to help out pheasants and other birds. 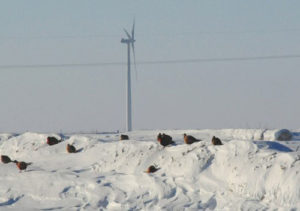 Pheasants on snow this winter. (Photo by Lowell Washburn, DNR)

Todd Bogenschutz says the severe winter weather this year showed a need for more food plots. “A lot of people were seeing birds — they were obviously out trying to find food with the ice layer kept them from digging through to get what was on the ground. And so they were just traveling far and wide to try and find food that was above the ice,” Bogenschutz says.

He says the size of the food plot you plant depends on what you want to accomplish. “You kind of have to think about your objectives, if you’ve got good cover around for the birds in a bad winter — then your plot can be a small one,” Bogenschutz says. “If you are trying to make the food plot the cover itself — then you kind of have to make them bigger. Generally you can get by without about an acre or two plot if there is good cover nearby.”

He says the goal is to make it so the birds can move right out of cover and eat and then go back without exposing themselves to long.  He says if the habitat is marginal that gets filled in with snow pretty easily in winter, you might want to plant a larger food plot of five to ten acres that can include a mixture of sorghum and corn that provides good cover and food at the same time.

Bogenschutz says the pheasant population had bounced back after some mild winters — but with a statewide average of around 39 inches of snow this year — he expects that to impact bird numbers. “I don’t think our pheasant counts have ever increased when we’ve had 31 or more. So I am expecting our counts for both pheasants and quail to be down for this coming year,” according to Bogenschutz.

There are parts of the state that may not be hit as hard as others.”Southeast Iowa seemed to get off maybe the best as far as the winter, I think everybody had snow and ice, but I think nontheatrical and northwest had a pretty severe winter ,” Bogenschutz says.

The DNR will conduct its annual roadside survey of pheasants in August.