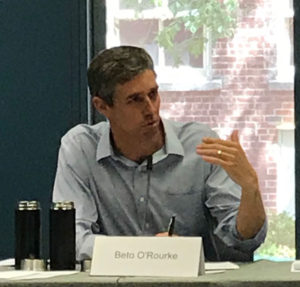 “Climate change is…understood to be happening beyond a shadow of a doubt for at least anyone who listens to the scientists or who lives in Pacific Junction or Davenport or Houston, Texas,” O’Rourke said early this afternoon.

O’Rourke, a former Texas congressman, has unveiled a plan to spend $5 trillion over the next decade to address climate change. During a forum tihs afternoon in Des Moines, O’Rourke said there’s an “economic upside in doing the right thing” and farmers can play a key role in meeting the challenges climate change presents.

“Not by dictating to them, but by partnering with them, listening to them, allowing them to provide the public service of capturing and storing more carbon on their land and then paying them for the public benefit that we receive from that,” O’Rourke said.

Flood prevention or “mitigation” is part of O’Rourke’s climate action plan. He said that means reconstructing and fortifying Missouri and Mississippi River levees to protect life and property.

“We can pay the cost of clean-up, of repair, of replacement or we can invest upfront,” O’Rourke said.

O’Rourke visited a farm near Pacific Junction this past weekend.

O’Rourke supports efforts in congress to offer some financial help to farmers with uninsured grain that was stored in bins, swamped and spoiled by the floodwaters.