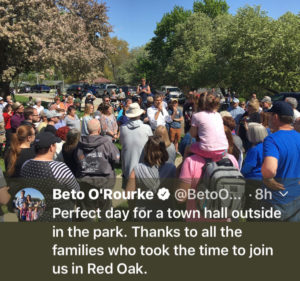 In Atlantic, O’Rourke drew a round of applause in Atlantic when he called for letting Americans refinance their student loans “at much lower rates.”

“We have a 10 percent default rate. Let’s get that default rate down to zero by making sure that your payments are affordable,” O’Rourke said. “Something is better than nothing and right now we are getting nothing from far too many of those who took out those loans.”

O’Rourke, a former Texas congressman, supported President Obama’s “College Promise” proposal that would have made community college tuition free for students who kept their grades up and made steady progress toward completing their two-year degree. He supports erasing student loan debt for college graduates who work in certain occupations.

“If you’re willing to work at the VA in one of those unfilled positions, let’s wipe clean in total the debt that you owe so that you can focus on taking care of those who stood up for us,” O’Rourke said. “If you’re willing to teach or become a public school educator in an under served community, come back to your hometown, perhaps – a decision you could not afford if you had to pay back all those student loan debts, let’s wipe those debts clean.”

O’Rourke spoke to a large crowd gathered outdoors in an Atlantic park early Sunday afternoon. He emphasized not only the importance of training beyond high school, but of universal preschool.

“Starting that education not at four or five, but at three or four, we move the starting line back so everybody has an even chance at success in their lives,” O’Rourke said.

O’Rourke also made stops in Shenandoah, Red Oak and Creston before a Sunday evening event in Newton.