You are here: Home / Crime / Courts / 5.6 pounds of coke found in speeding vehicle stopped on Highway 20 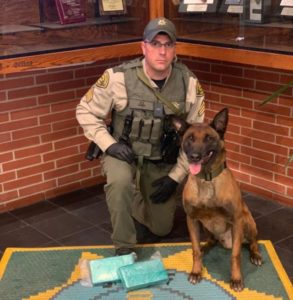 A traffic stop Sunday night in Woodbury County led to the seizure of over five and a half pounds of cocaine.

Woodbury County Sheriff’s Sergeant Nate Sands stopped an eastbound vehicle on Highway 20 at Osceola Avenue that was traveling 82 mph in a 65 speed zone.The driver, 37-year-old Jacob Rios, had a California drivers license and a car registered out of Oregon. Court documents state Rios was very nervous and couldn’t give the correct name on the registration. He also stated he was going to see a friend in Chicago but couldn’t immediately think of the friend’s name.

Sgt. Sands had his dog Rico sniff the vehicle and around 5.6 pounds of a substance which field tested positive for cocaine was found in the trunk under the floor where the spare tire should have been.

Rios was taken into custody and charged with possession with intent to deliver cocaine, speeding, no drug tax stamp, no vehicle insurance and was put on a federal hold for ICE.  Rios is being held in the Woodbury County Jail on $30,000 bond.