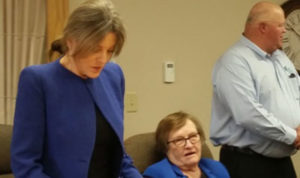 An author and self-described spiritual adviser who is one of the 22 declared Democratic presidential candidates stopped by a Mason City ethanol plant on Monday afternoon. Marianne Williamson said the U.S. government isn’t looking out for all its citizens.

“We have a government that has become little more than a system of legalized bribery that does more to advocate for short-term corporate profits for huge multinational corporate conglomerates than to advocate for the people and the planet,” she said in an interview. “I think it’s time for the people to step in. We need a serious and fundamental pattern disruption of the economic and political realities that have made all that happen.”

In 2016, Donald Trump promised to “drain the swamp” in Washington, but Williamson said that’s not a phrase she likes to use.

“It’s a childish and an immature and a superficial phrase for a very real phenomenon,” she said. “It’s not a swamp. It is an ocean of corruption. It is not just a few swamp creatures. It is an entire unholy alliance between certain economic interests and our government and this has been going on for 40 years.” 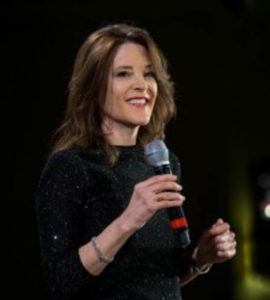 Voters were seeking a “change agent” in 2016, according to Williamson, but she said Trump isn’t it.

“I’m sorry to say it. I don’t mean to be disrespectful, but I think he’s the biggest swamp creature of all,” Williamson said. “He is a change agent in the worst kind of direction, but I believe that the basic desire for change still exists.”

Williamson visited Golden Grain Energy and sat through a presentation to learn more about the evolution of the ethanol industry. Williamson, who is 66 years old, has run for office once before — finishing fourth in a California congressional primary in 2014. It’s unlikely Williamson will reach the fundraising and public polling targets to qualify for the first televised debates among 2020 Democratic presidential candidates