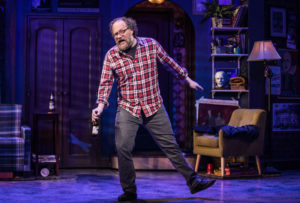 A New York stage actor and native eastern Iowan is up for one of the biggest honors in his profession.

Andy Grotelueschen is nominated for a Tony Award for Best Performance by an Actor in a Featured Role in a Musical. Grotelueschen earned the nomination last week for his portrayal of the character Jeff Slater, an underachieving writer, in “Tootsie, the Musical” on Broadway.

“I didn’t even watch the nominations because…that’s okay,” Grotelueschen says. “It’s just fine. I didn’t need to be a part of all that energy.” The Clinton native and 1998 Clinton High School graduate says he’d heard the rumors he might be getting a nomination but he really wanted to keep from getting caught up in the frenzy.

“There was no avoiding it because at 9 o’clock, my phone was going crazy,” he says. “I had about 80 text messages and my phone wouldn’t stop buzzing. I rolled over and was like, ‘Uh-oh, I think it happened.'” Grotelueschen’s first time on stage was in seventh grade in a performance of “Wizard of Oz” at Clinton’s Lyons Middle School. He had a very small part and also had the duty of pulling the curtain, but that was all it took to hook him on acting.

Grotelueschen says he’s never been to the Tony Awards before, so it’ll be a big deal. “I think I’ve gotta’ rent a tux and then yeah, we’ll just sort of see what happens,” he says. “It’s going to be a crazy party.” Grotelueschen’s Tony nomination was one of 11 for “Tootsie.”

The 73rd Annual Tony Awards will air on CBS the evening of June 9th with James Corden as host from Radio City Music Hall in New York.