You are here: Home / Fires/Accidents/Disasters / I-29 opened from Highway 34 to Missouri border 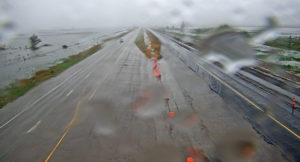 DOT camera view today on I-29 near Percival.

The Iowa Department of Transportation opened travel on flood-damaged Interstate 29 between U-S Highway 34 and the Missouri border this morning.

DOT transportation planner, Scott Suhr says the opening comes after a lot of effort. “The contractor’s been in there working for the last several weeks and has made significant progress. It won’t be completely opened up to two lanes in each direction, motorists will experience some head to head situations — and also one lane through part of it,” Suhr says.

He says drivers will have to use caution. “This is still like a construction zone, there’s gonna be construction activities occurring on the outside lanes. And then also we’ve got construction work occurring at the eight-point-five mile marker, where they are working on repairing a bridge that was damaged by flooding — so we’ve got a head-to-head traffic formation at that location,”according to Suhr. “And also we want to remind motorists and freight movers that we have a lane restriction of 20 feet So any oversized loads are not allowed on I-29.” 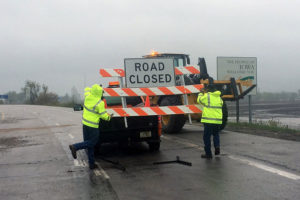 DOT workers take down I-29 barricade.

Suhr says it isn’t normal traffic flow, but it does get traffic moving to help those who have had to detour. “The main thing is we are able to get some type of mobility restored from U-S 34 south to the Missouri line,” he says.

Several crews are involved in the emergency repairs in southwest Iowa, and Suhr says there’s one big challenge each faces. “The unknowns, the amount of voids that are under the pavement, the ability to coordinate things and get contractors in there in a timely fashion,” Suhr says, “and obviously weather has been a factor in trying to get this open.”

Suhr says they had been working hard to get Iowa Highway 2 at I-29 open — but the continued rain and water over parts of the roadway has set that back. “We’re going to continue to monitor the area and once we are able to open up Iowa 2 we’ll do so,” Suhr says. “Iowa 2 will be open at the interchange and you’ll be able to get fuel and any services you need at that location. You won’t be able to go west — but you will be able to go east on Iowa 2.”

Suhr says the I-29 opening comes earlier than planned, and they are continuing to try and get other roadways open before the end of this month.
“Hopefully between now and Memorial Day weekend we will have everything opened up to some type of mobility,” Suhr says.

You can check out the progress on the flooded roadways at the DOT’s 511 website.